To be very honest, I am not a very good track planner, and even if I am, I am too confused to understand what I like and what I don't. So since the time I decided to make my next layout (that was in the first half of 2008, just after moving to Calcutta from Bangalore), I don't know how many different plans I created. I spent nights boring the hell out of my wife just laying virtual tracks - I would like bits of one but the others were not acceptable, some were too big, some too small, some complicated, some too simple - and the plan(s) kept on changing.

One thing was for sure, right from the start-it had to be a port-In fact I have as much love for ships as I have for trains and was determined to combine them. So I started scratchbuilding . Started with my all time favorite Sirius-the oil tanker, then a series of ships, and tugs and cranes and bridges... Well you know, everything you need to represent a port. And, for all these months I squeezed my pocket to keep on buying things that I require to build a layout-tracks, turnouts, electronics and of course, I kept on changing The Plan.

About 3 months back, I happened upon a plan in the pile of layout drawings which inspired me to start with a waterfront layout in the first place-Ian Rice's 'Coalport, Maryland, 1941' featured in his book 'Small, Smart and Practical Track Plans'. And suddenly I realized, why I was unable to decide on anything for so long-because unknowingly I liked this plan, or better to say that loved this plan so much, that I didn't really like any other designs-neither mine, nor others. So as much as I wanted to make a plan that is unique and all created by me, I decided to go for this one... What could I have done? First cut is the deepest... :-) Why did I like this plan? Well, this had everything I want and would love to see! Large water body, interesting switching, a draw bridge, a carfloat, a trestle, a lighthouse (LIGHTHOUSE!!!) and the most important part was that even though this was a pure switching layout, it had that depth of field, that very interesting and intriguing entry and exit. Also, if you try to imagine how the trains are going to run on this layout, you realize that even though this is a small layout, that reverse loop can crate a sense of distance that is generally not present in most switching layout. 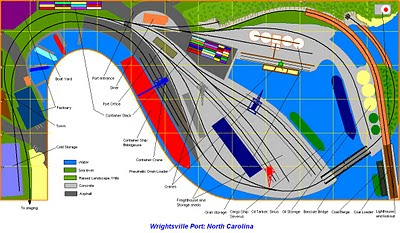 Layout Statistics:
The layout will also have complete remote switching and uncoupling, as well as automated signaling system.

As of right now, the benchwork has been completed (to be discussed in my next post), the necessary materials and tools have been gathered, the workspace cleared and I have a long Thanksgiving vacation which I plan to put to optimum use in formally starting the project!!
Posted by Unknown at 12:27 AM