Let there be light!

Well, I received a parcel this Friday (and I surely hope this is the last one for quite some time as it's already a deep hole in my pocket). What did this parcel contain? among other things, this: 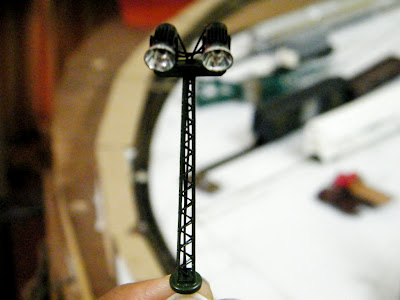 This is a Brawa flood light that did cost me around 24 dollars! But I am not complaining even a bit - it's worth that money. EXTREMELY good finish, great detailing, to the scale, The flood light heads can be swiveled to any horizontal and vertical angle desired (!!!!), and yes, the light is just perfect! And the most surprising part? It's not Made in Germany like my previous Brawa lights - it's Made in China! Frankly, this is the best 'Made in China' product I have ever seen! And just hope all my future Chinese products are of this quality.

This stuff comes with a removable base, basically fits to the 'female' piece perfectly (I know that DID sound wrong, but that's exactly how they say it!) The next images will give you clear idea: 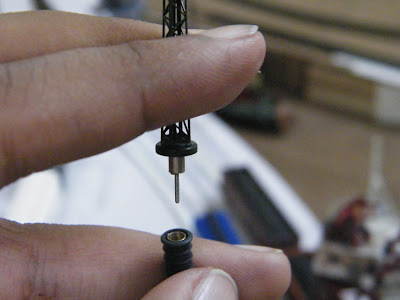 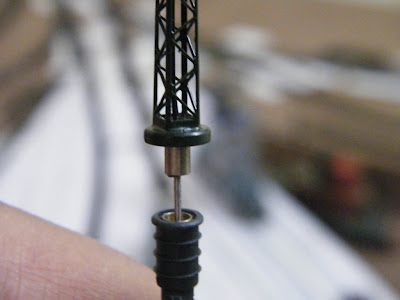 Now, I could not resisting doing a temporary installation on the layout. I dug two holes, one for this and another for my other Brawa tall pylon light. Also, arranges for some light in Betelgeuse. This how it looked, just with these three lights: 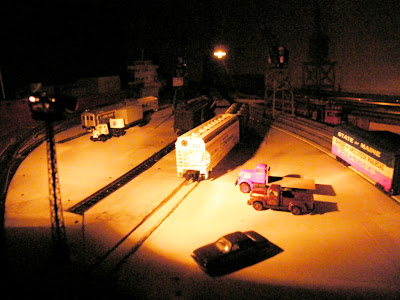 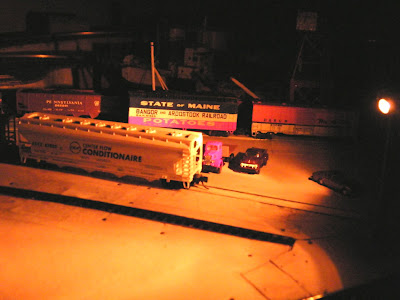 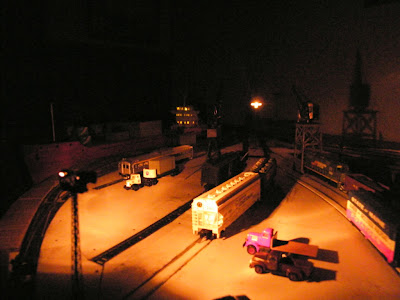 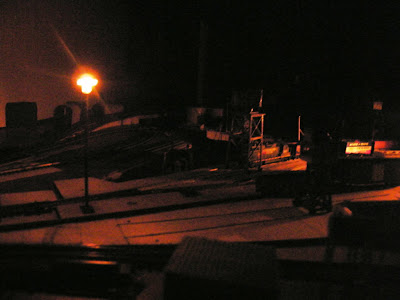 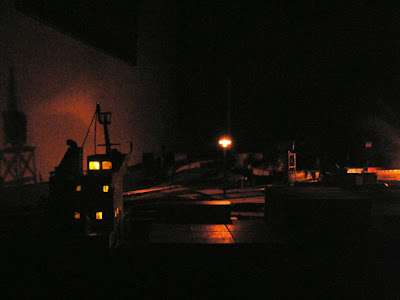 Posted by Unknown at 3:12 AM No comments:

I needed a trestle for my coal discharge portal approach. Now, it could have been easier for me to build a wood trestle, but I wanted a steel trestle instead! That too a very unimpressive trestle that ramps up to an age old top discharge, hopper to barge coal un-loader. The unique problem in building steel trestle/viaduct is the parts - the plate girder spans, bents and the braces - all have to have appearance of steel. Now, I wanted a little easy solution, so I went for Micro Engineering Steel Viaduct kit instead of buying separate I-beams and cross braces of different dimensions.

In the picture below, you can see the main parts to build two double-bent steel towers , each 8 inches tall in N scale. It's a great kit and it would been really exciting just to join the pieces and make a tall trestle in a couple of hours or so - but in my case it was just not that simple. :( 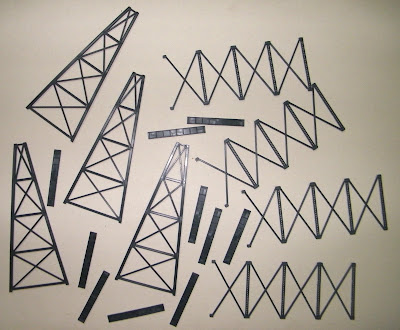 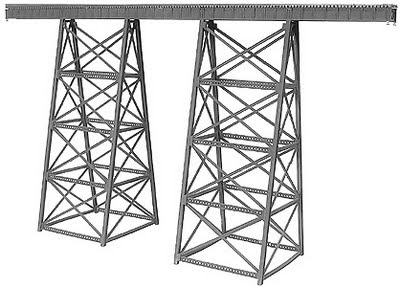 Solution? Cut them all in different sizes and make them match the given specs! I had removed the top one section of the bents to handle the sharp curve and to match the width of the trestle. Then I've drilled small holes on the baseboard to hold the bents. distance between the bents are kept exactly as the width of the braces in the kit, but the inner side of the curve had to be modified. Here is a series of pictures of the trestle after the first night. God it was tough! 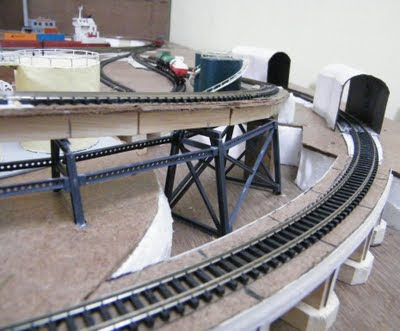 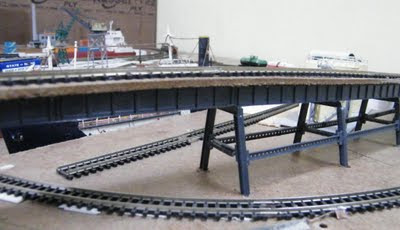 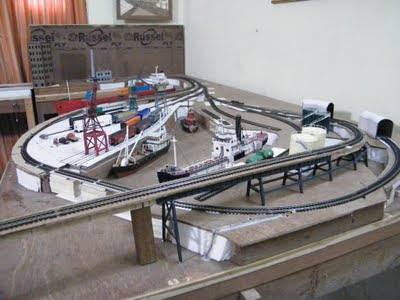 Now, I have had laid tracks already and used a series of Jenga block for a strong base - kind of my own version of plate girder spans - so I would not be using all the parts to build the spans. I would just use the plates and stick them on the Jenga blocks as a cosmetic modification.

Next morning, I added the cross braces to the small bents to make it look more like a trestle. 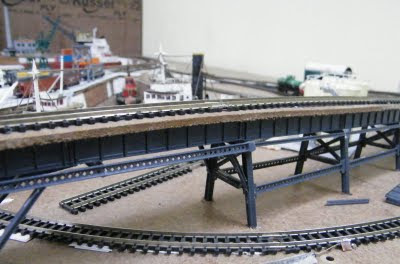 Then there was a bigger problem - the span over the main line. As you can see - the span over the mainline goes through a pretty broad curve. So I need nearly double the regular span to connect to the last bent of the trestle on the water before it joins the discharge portal. I wanted to put extra heavy duty bracing for this, having support from both the bents. 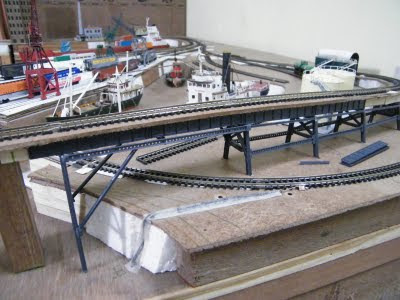 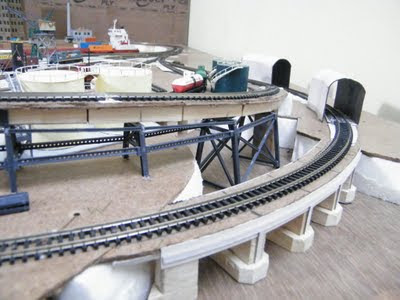 Now I thought this is the end of it, and then I started writing this blog tonight after returning from work. When I revisited the pictures, I realised something - that last span is unrealistic from engineering perspective. If that span would have connected to double bent tower, it would have made sense, but to a single bent it is definitely a weak bridge. So I rushed back to the layout, took the remains of the kit and found to my relief that I still have some parts of the bents left. I decided to put two diagonal bents on two sides of the track and then connect them with braces. And, after over three hours this is what I had: 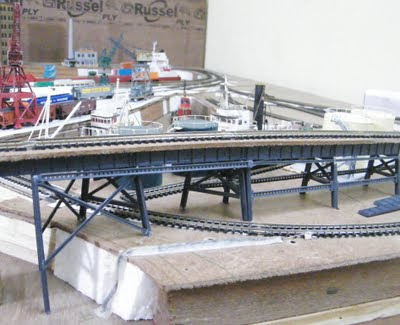 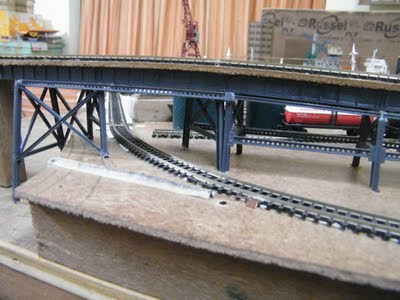 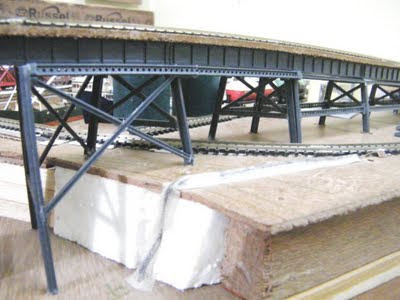 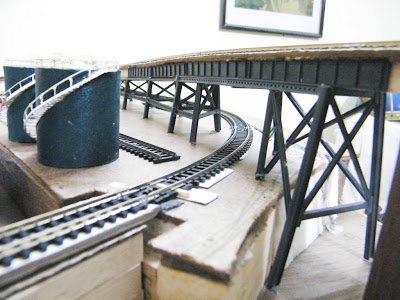 Well, this might not be the Eiffel Tower, but a small port in '60s North Carolina was not really known for the modern engineering marvels, was it? Now I am pretty satisfied with how this turned out. Most of this trestle will be partly hidden in bushes and trees, and as I imagine it after the model is complete - will be a very unimpressive steel bridge which is just perfect for the model.

Next step - finishing the plate girder spans - some of which will have to be made out of card board since i do not have enough from the kit to cover the whole bridge.
Posted by Kaustav at 10:56 AM No comments:

Well yeah! this is probably the most loathsome part of this hobby to me. Now I have been fiddling with wires for over a month now and done installing all the Peco turnout motors three of which being a pain in the butt - they seem to be very 'one sided', not willing to move to the other side at all. For last three days I am just trying to find what's wrong and trying to fix them - let's see how that goes. Hope they start working soon. Ignoring those, I would say 80% of the wiring job is done - I am left with the light fixtures and signals.

I guess, now I can start with the part that I was actually looking forward to for a long time - scenery and detailing. I had fun last night doing a little bit of operation and I think it's time to look at the brighter side! :)

Videos and photos coming soon...
Posted by Kaustav at 11:48 PM No comments:

Just could not resist this one!

Posted by Unknown at 2:09 PM No comments:

Well, it definitely feels good to see your work published. And it's a little bit special if it's India's first model railroading eMag-isn't it? Now this hobby (and any other form of model engineering) is hugely neglected in this country and playing a part to make it a little popular definitely makes you feel good.

A huge thanks to Nilanjan for this opportunity and for all his hard work and sacrifices to make this hobby popular in the country. I just wish I had time to do more in my part. :(

If readers of this blog are interested for custom model railroading projects, please feel free to let me know. PLine models take various custom projects across all scales (but specializes in O and above) and I will be happy to give you the reference. Check their website for more details about their projects .
Posted by Kaustav at 12:56 PM No comments: