The next step was to add the shades at the end/joint of the each conveyor segment. I had simply cut the appropriate sizes of the corrugated sheets, painted them, and glued them using model cement. Given there are no removable parts, I just used the existing structure as reinforcements for these structures and didn't really waste any time creating reinforcements of their own - after all time is short!

The next phase was to create the hopper car loading facility. Here, I need to mention that like most of  my other structures, this one will also be removable to aide easier maintenance down the line. So, I made a simple structure using the corrugated styrene sheets and glued it to the edge of the concrete base of the coveyor structures using additional cardboard reinforcements and small ABS pillars - this structure doesn't really have a base and when moved will be held in place just by that one edge.

So, here are some photos. My aging Fuji camera is not really in best of its abilities but that's the one I had right on top of the layout - so, just took some quick shots - you have to excuse that extra noise. 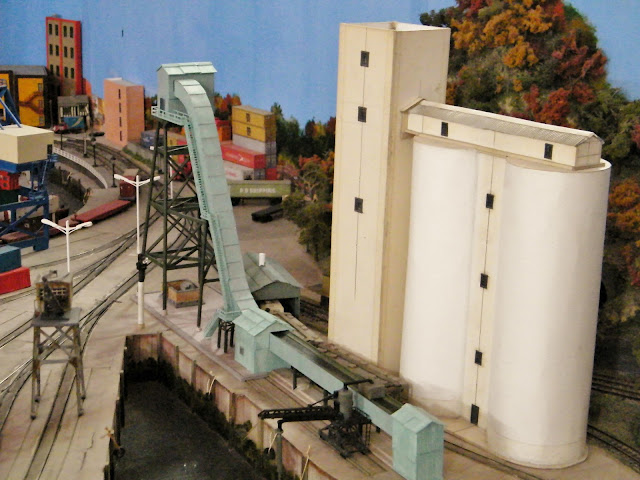 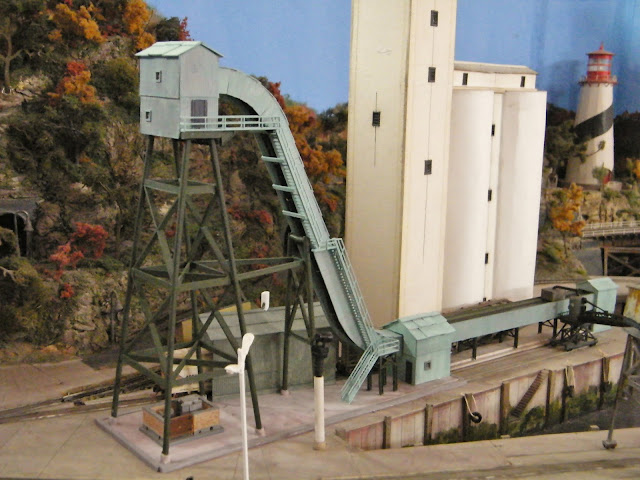 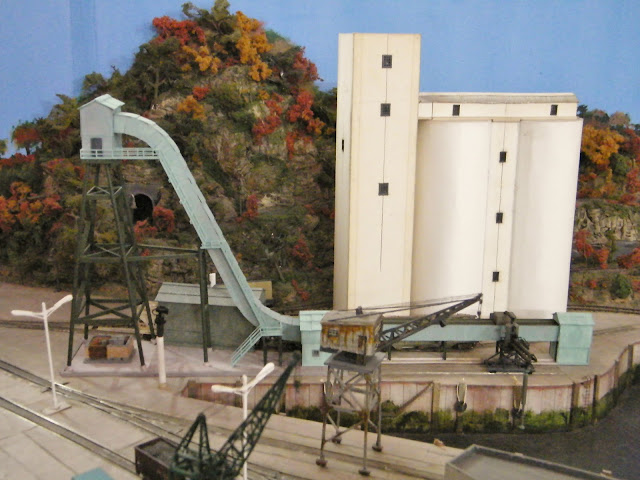 The remaining pieces in this facility are the conveyor section to connect the HAC and the elevator tower, connecting the rail car loading section to the elevator tower and finally building the barge loading arm - and of course necessary painting and weathering. Given I will be on vacation the whole of next week, I am assuming this would take at least 2 more weeks to see completion.
Posted by Kaustav at 2:36 AM No comments:

The next step in the conveyor belt portion was to add the 'stairway to heaven!' Pretty straight forward - glue the Plastruct stairs using model cement, and then add the railings. I have used small styrene pieces as the top floor and landings, and some spare parts from the trestle kit to support the first landing from the floor.

The next step was the time consuming painting! However, I have moved away from acrylic in this one (because my matt medium stock is over) and decided to use leftover paint from one of my airfix kits that I built a few days back (A Messerschmitt Bf109 for interested souls). As you can see the humbrol enamel paint does a fantastic job even without an airbrush. I have never achieved this finish with acrylic using paint brush.

as you can see, the wires for lights is in place as well (actual lights yet to be installed). 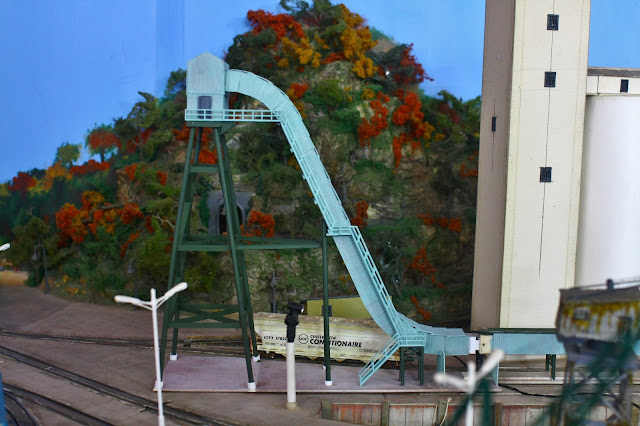 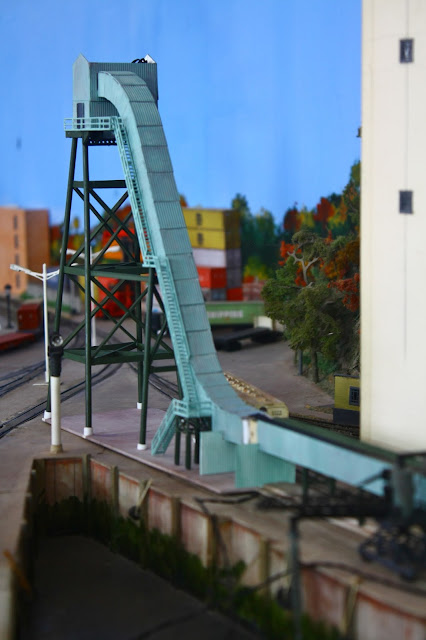 I finally forced myself to take some time out to engage in another intricate project. It's going to be 5 years in this November that I started with this layout, and now I really want to see this finished as early as possible. Well the fact that I have been saying that for last 3 years sort of indicates how realistic that is going to be! :)

Anyway, so among the major items that are still pending, I thought of taking up the grain facility as the first one - it's already half done, and is actually the biggest of all the facilities, so finishing it will be a major milestone.

So as you have been seeing for last about 3 years, the silos and the elevator tower is already in place, so is the small pneumatic unloader. To refresh your memories, here is the build description of the unloader:

Now, given the extremely constricted space available and the fact that the rail line goes in between the unloader and the elevator/silo, I decided to approach the model in a little different way - simulate the elevator tower just for the output to barge and hopper cars, and use conveyors for input to the silos.

This required a High Angle Conveyor, or commonly known as HAC. The operation can be visualized as the barges bringing in the grain will be unloaded by the pneumatic unloader, place on a horizontal open conveyor that takes it to HAC, HAC lifts it to the required height, and then another low angle usual conveyor takes it to the silos turning it nearly 180 degrees. The elevator mechanism required for loading barges and hoppers can be imagined to be inside the elevator tower. 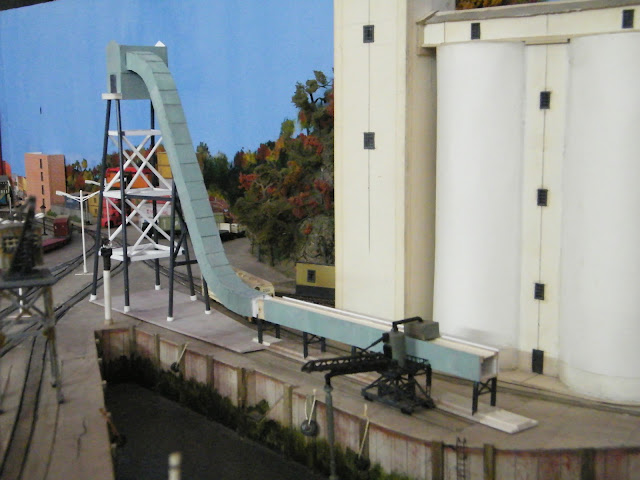 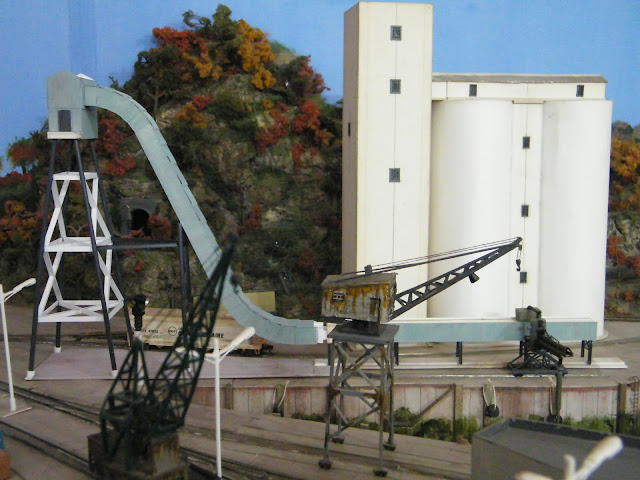 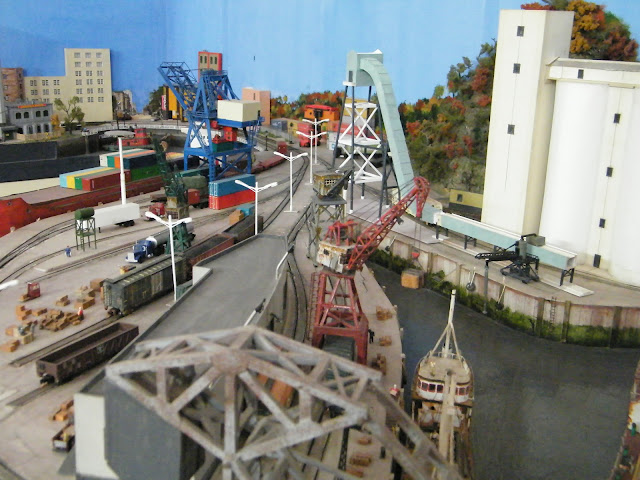 Materials are primarily styrene sheets (Yes, a change in my approach from paper for once) and left over runner material from my old trestle kit - after all, I had to use some scrap material to do justice to my approach!
Posted by Kaustav at 2:36 PM No comments: