Now that the container crane is done, I started working on the backdrop. Used Scalescenes container paper kit to make some container stacks, and a poster painting of Black Mountain, NC as the port approach. Also used Miller Engineering chain fence with barbed wire to give that extra effect. 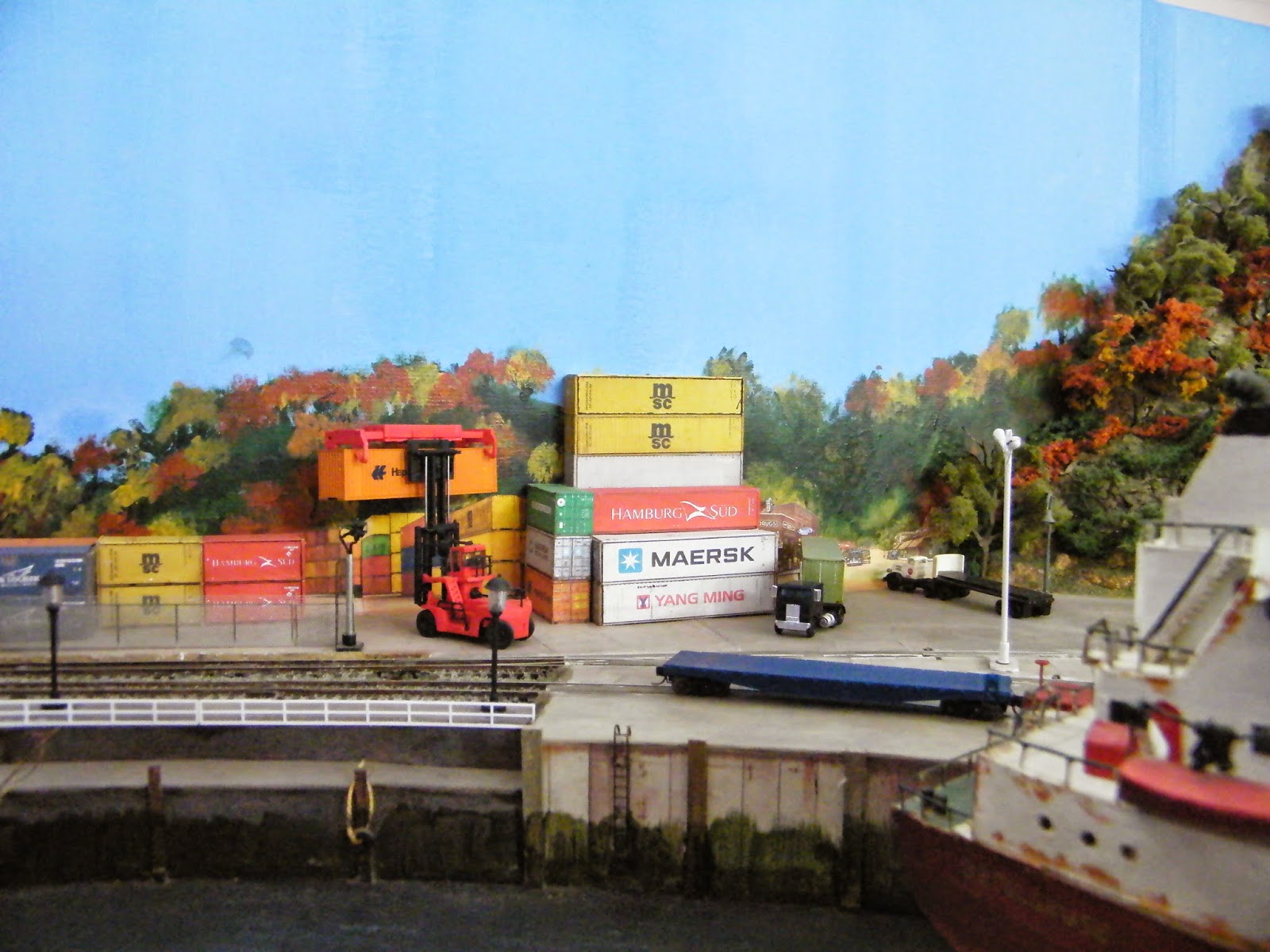 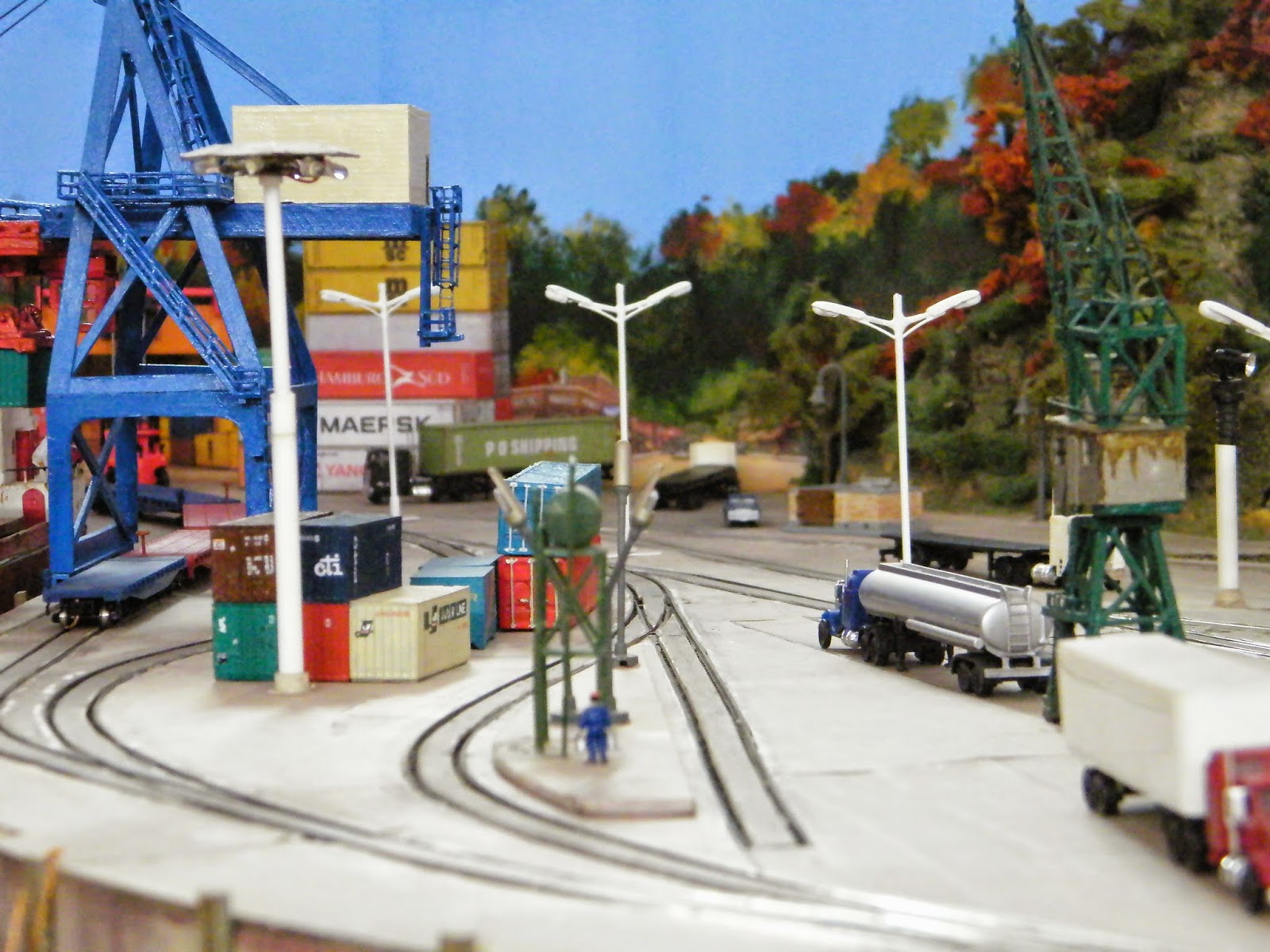 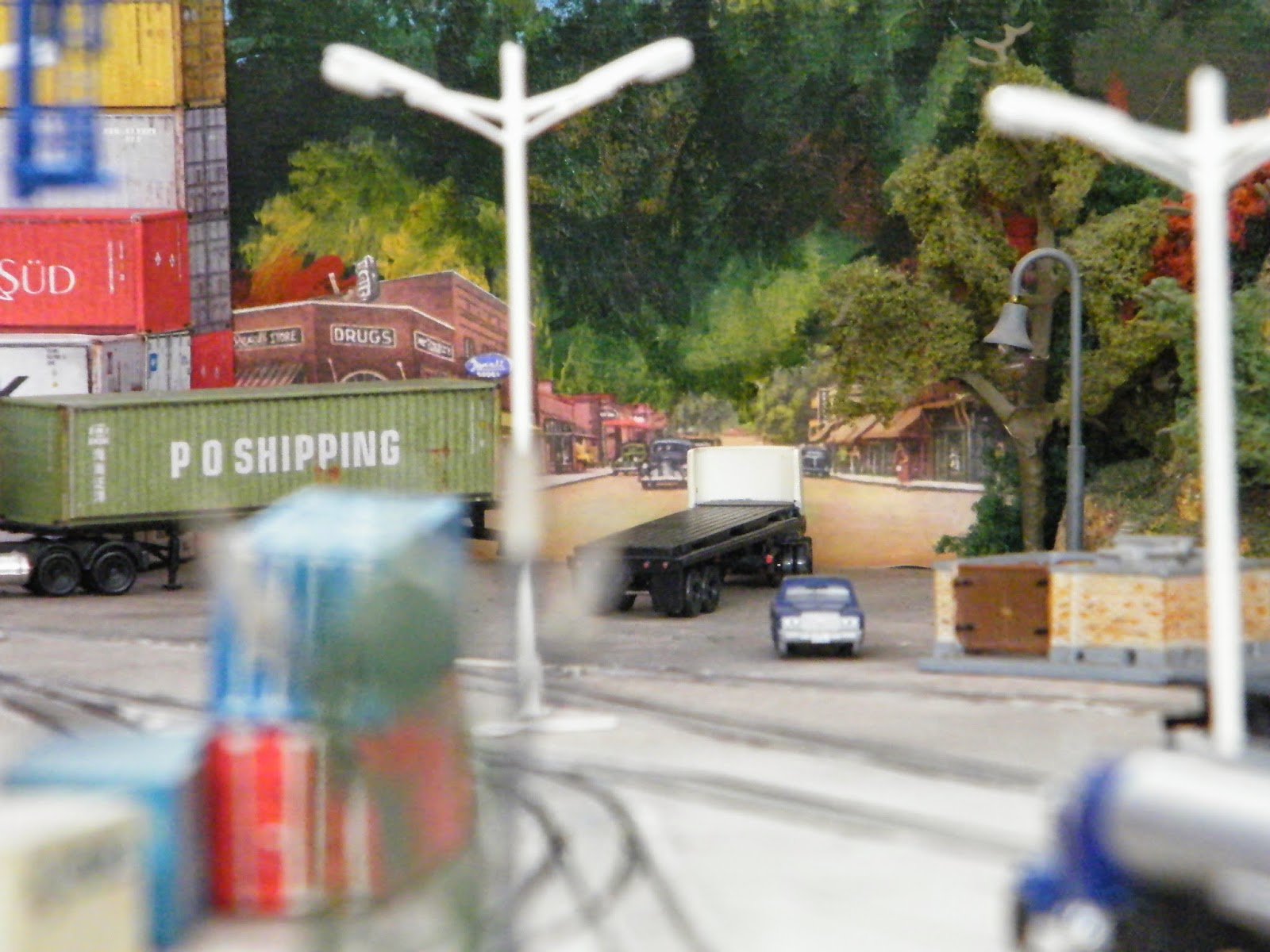 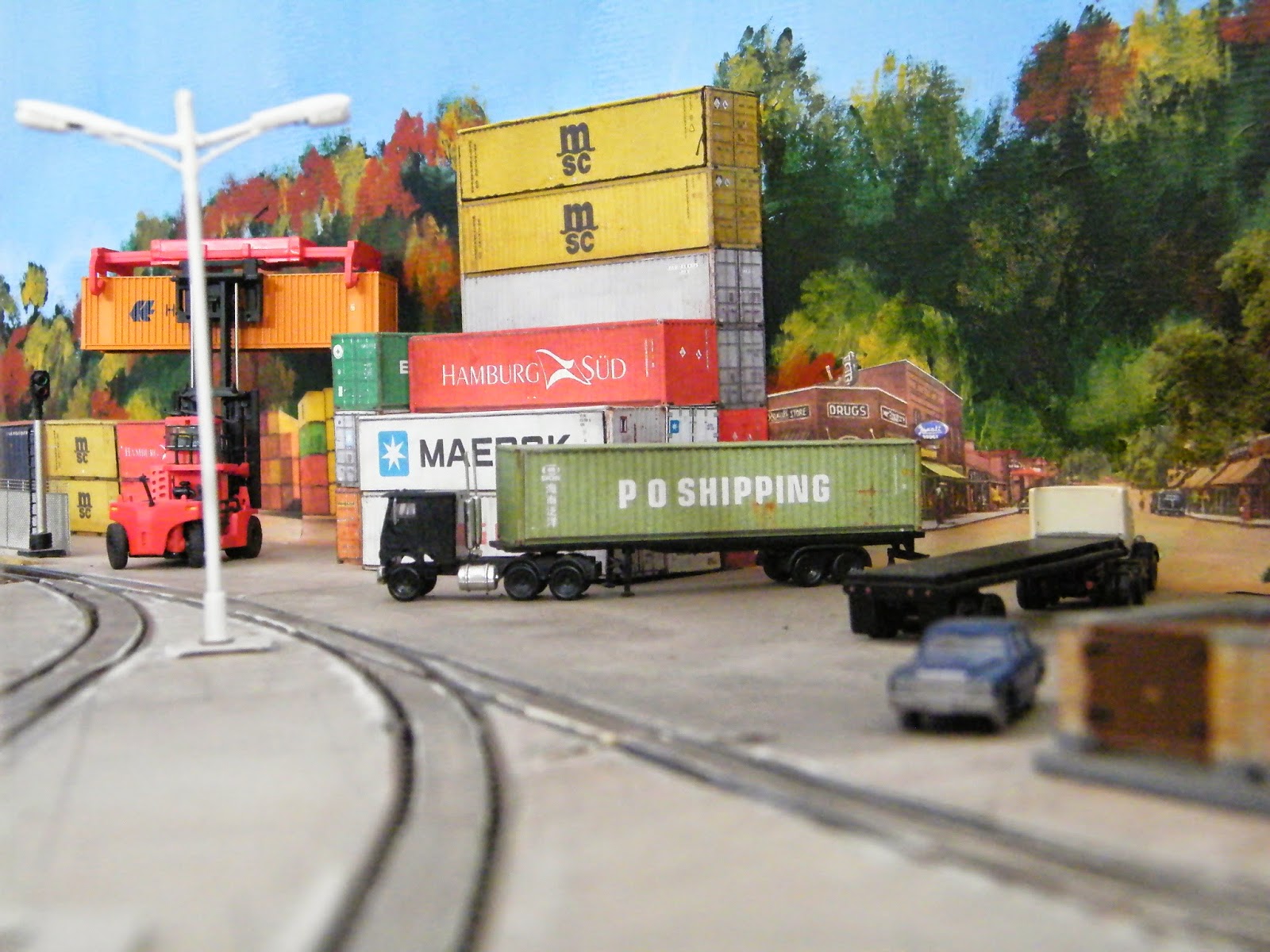 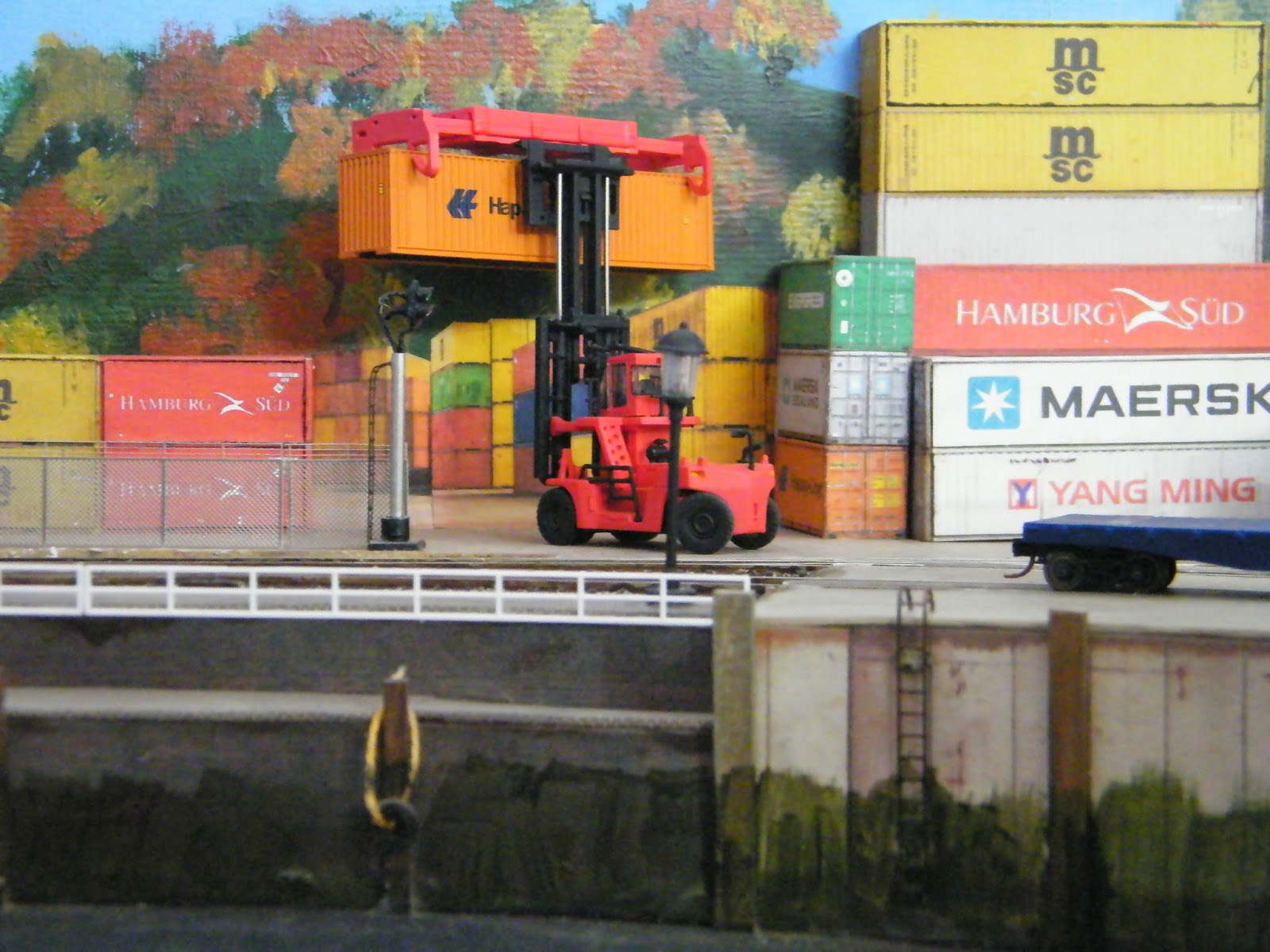 And here is the crane again! ;) 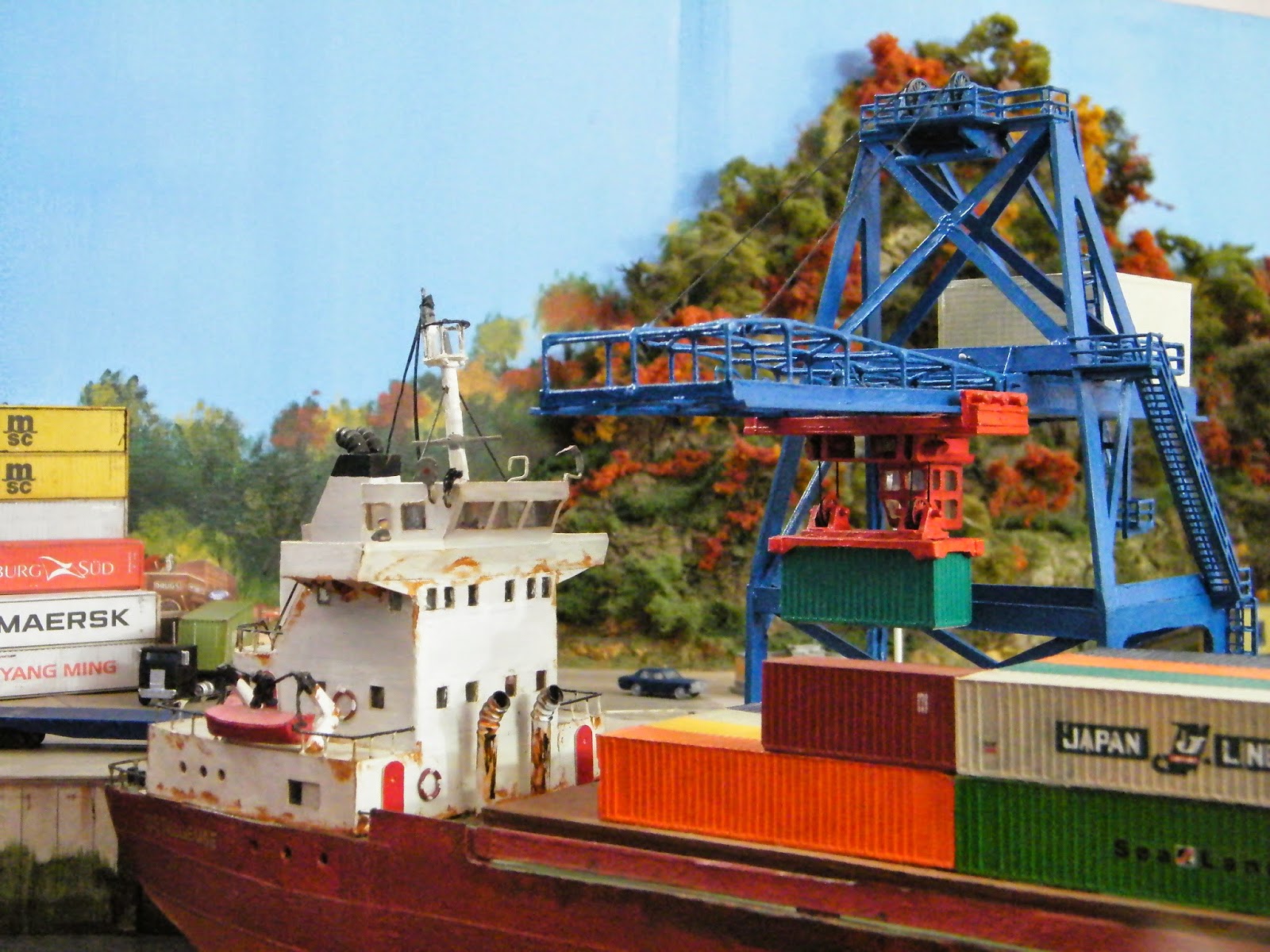 Posted by Kaustav at 9:57 PM No comments:

Well, this is sort of a late update as the container crane is actually built over a week ago.

Continuing from where we left, the next step for me was to make a counterweight. Mind it, it was not just for cosmetic reasons - given I made the trolley movable, and used metal tubes for the beam, the front part of the beam was actually heavier than the the other, and I did require a proper object for the counterweight. Fortunately, I had exactly the right piece - a burnt 12V DC motor! Never thought it would come to any use, I kept it so that one day I can use the gear attached to it! seems like it came to better use. 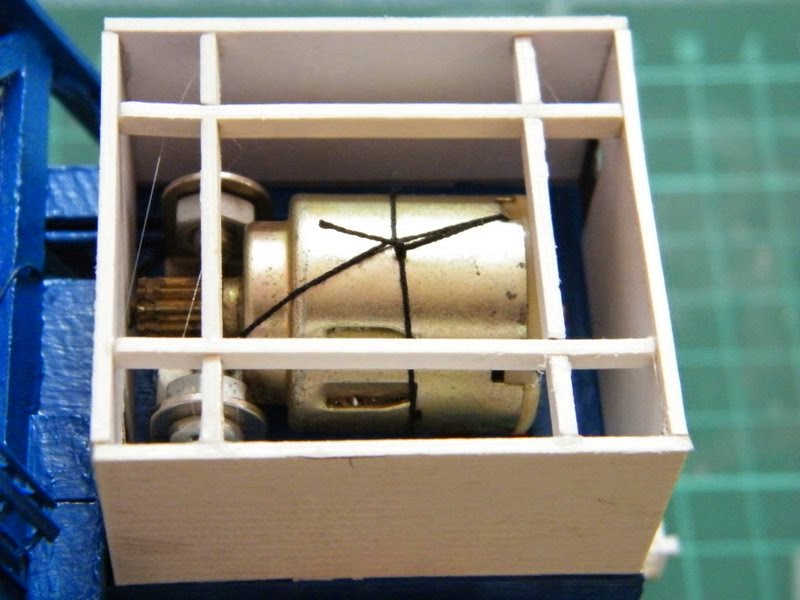 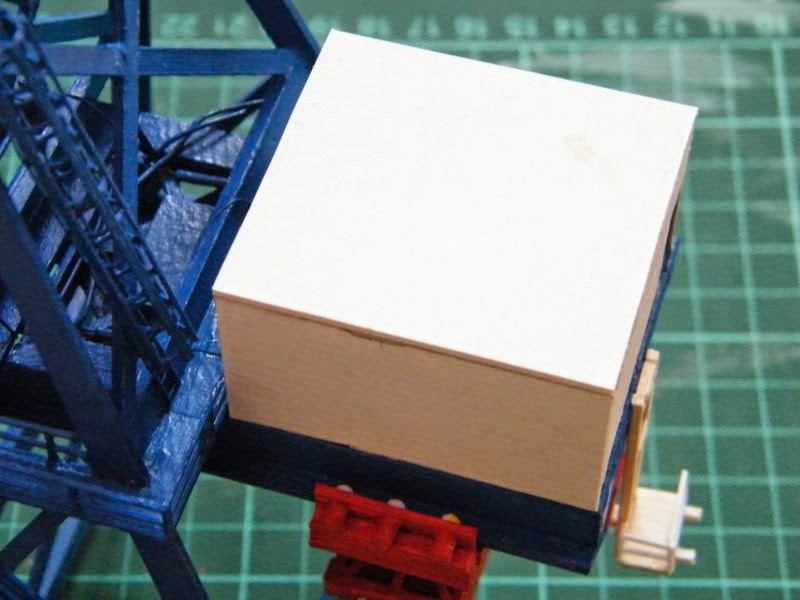 Once the counterweight was done, I made the ladder for the operator cabin. used the same methods as before, so there is no new technique here: 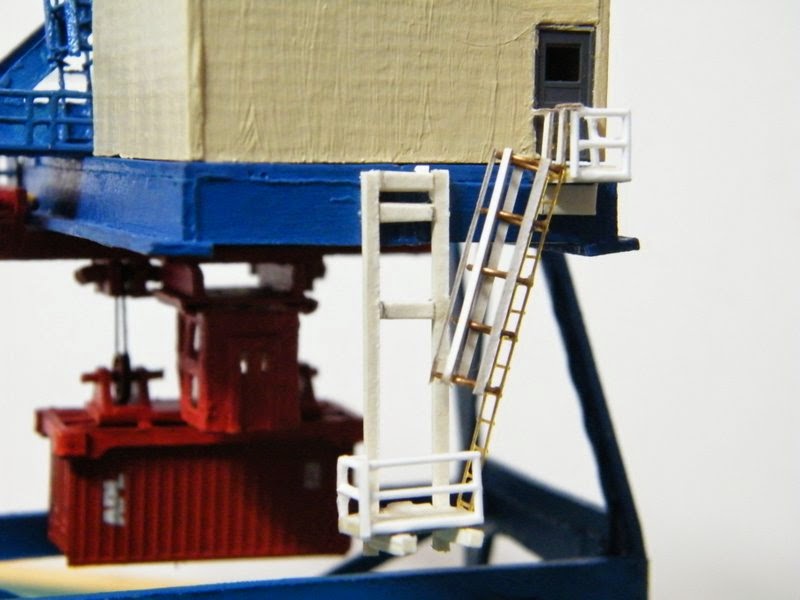 The next part was to create a simple pulley combination to lift the beam to simulate non-working period. Below are the steps:

First, I used #40 mercerized cotton, some single strand electric wire and small pieces of styrene tubes to make the rotating joint for the pulley thread: 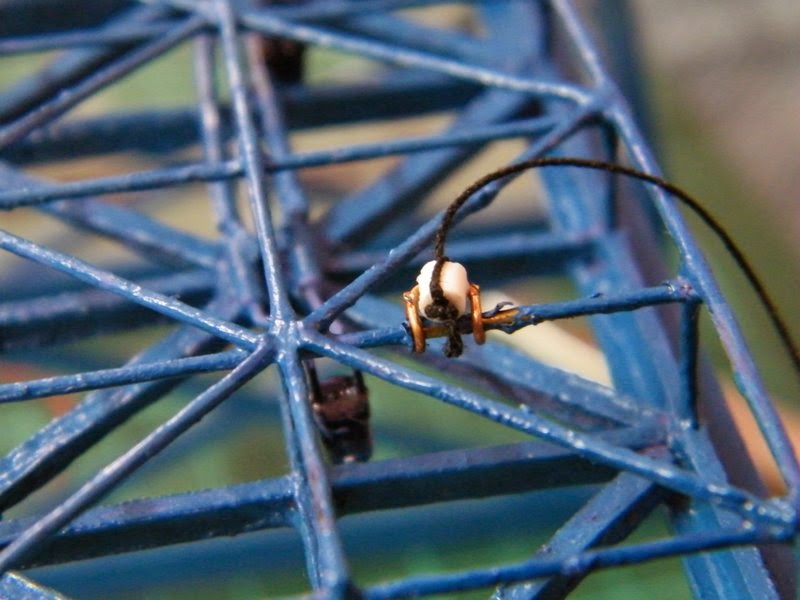 Second, I used the Grandt Line large wagon wheels, used the same method I used to make the pulley for the spreader, I had cut a groove along the perimeter and made a solid cardboard housing for the same. Once done, fixed them on the top of the crane, took the threads over them and through the tiny holes right behind them to the underside of the top frame.notice that the pulleys are actually at an angle, just like the prototype. 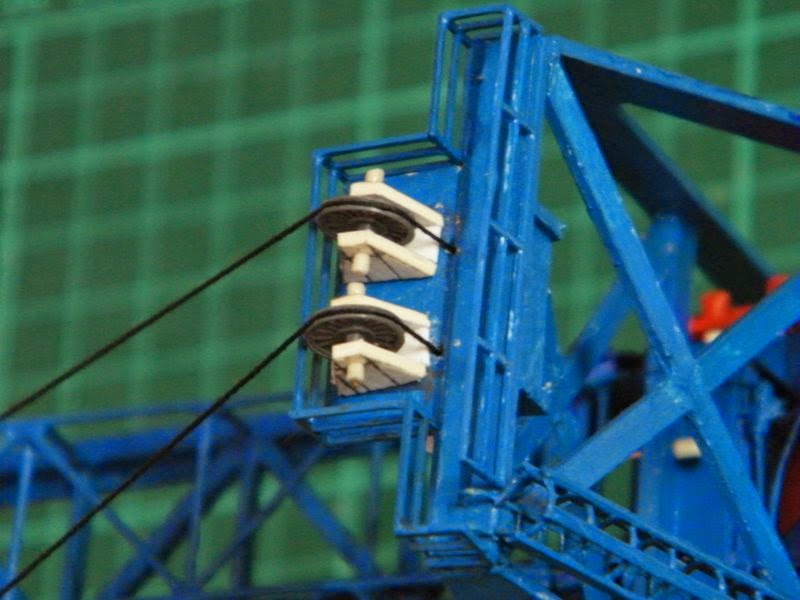 Third, under the base, I just tied the two strings to a styrene rod with the help of some copper wire to keep them parallel to each other. Now, when you pull down that styrene rod (Using a a pair forceps), and lock it under the fixed pins on the main frame, the beam is drawn, simulating an inactive state. 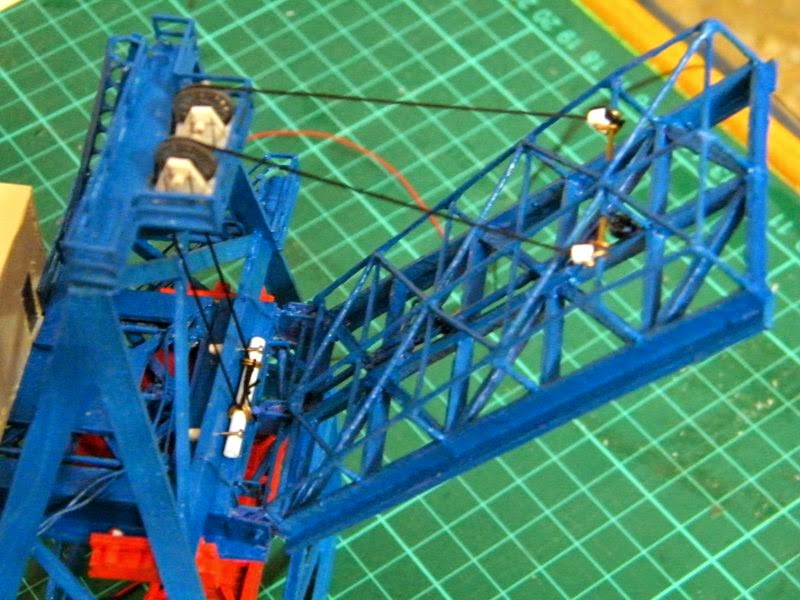 The last part of the build were the wheels. I didn't any fancy with that - just took 4 plastic N scale wheels, cut them, and put them in a cardboard frame - that's it. 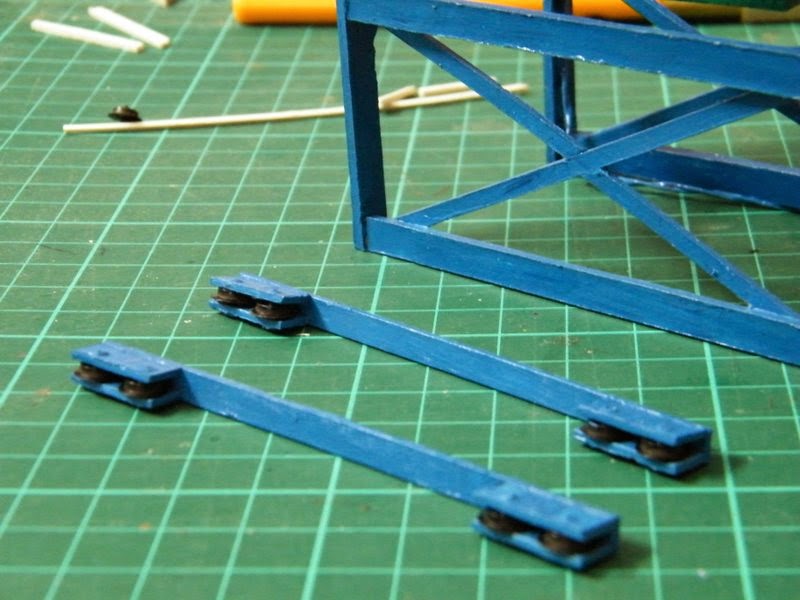 Finally, after all the pieces are put together, glued and painted, here is the final piece: 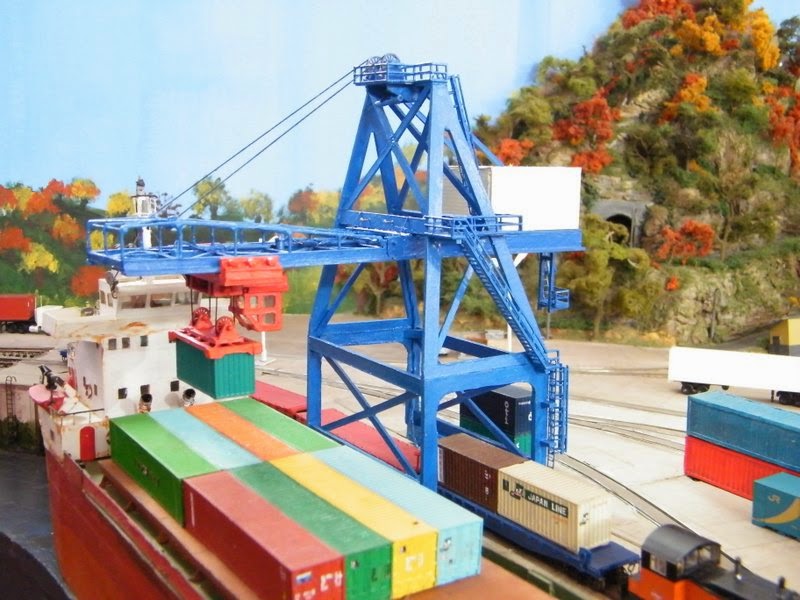 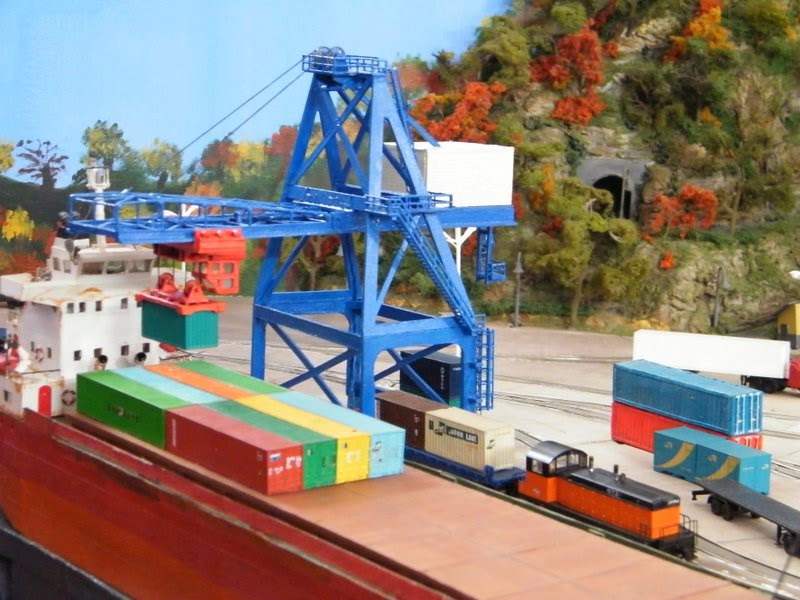 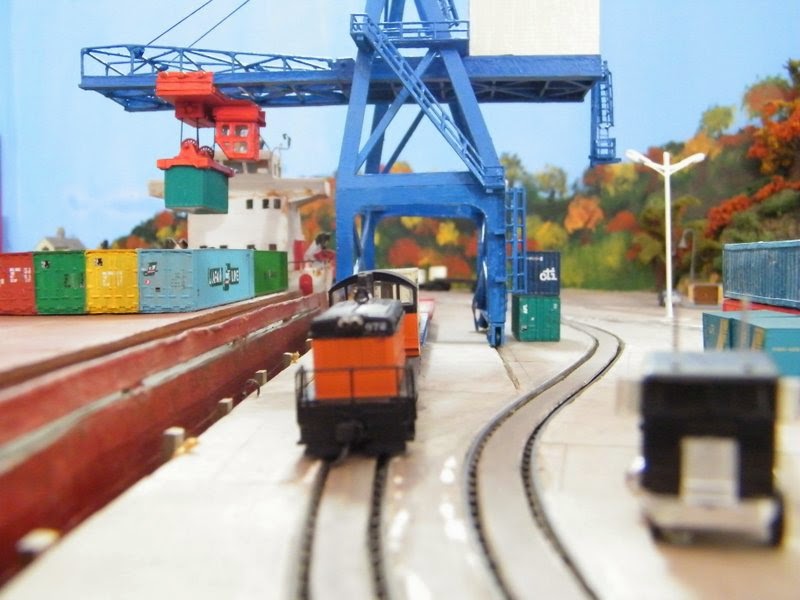 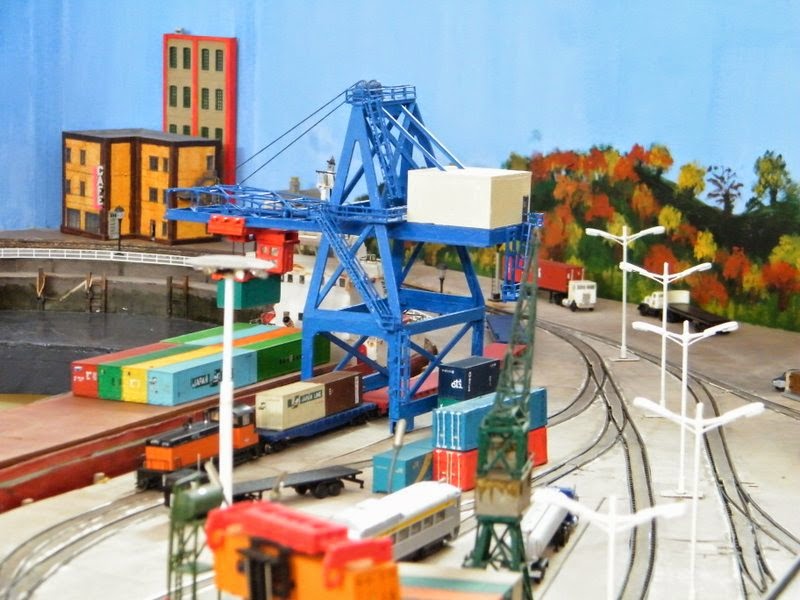 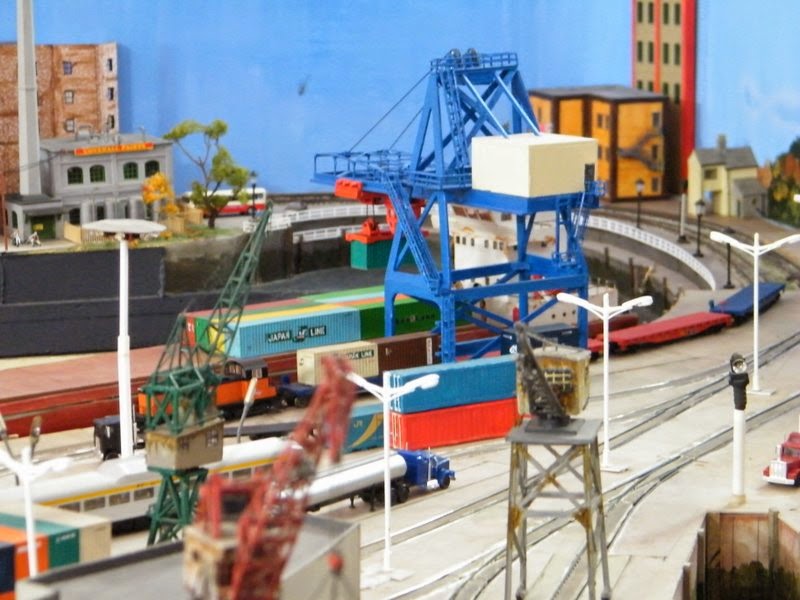 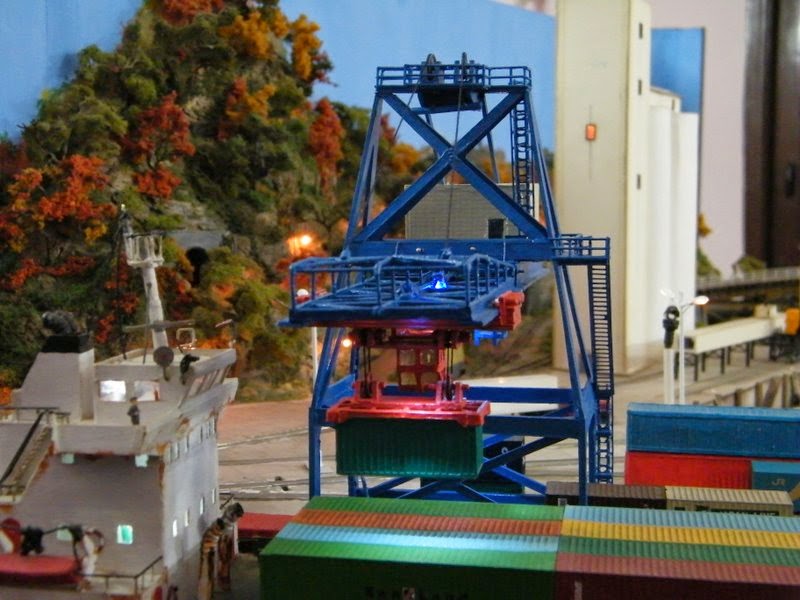 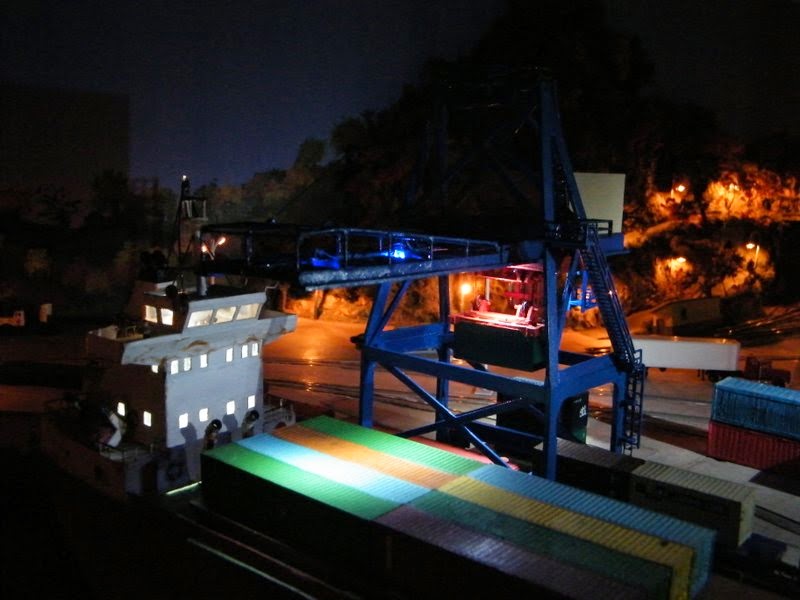 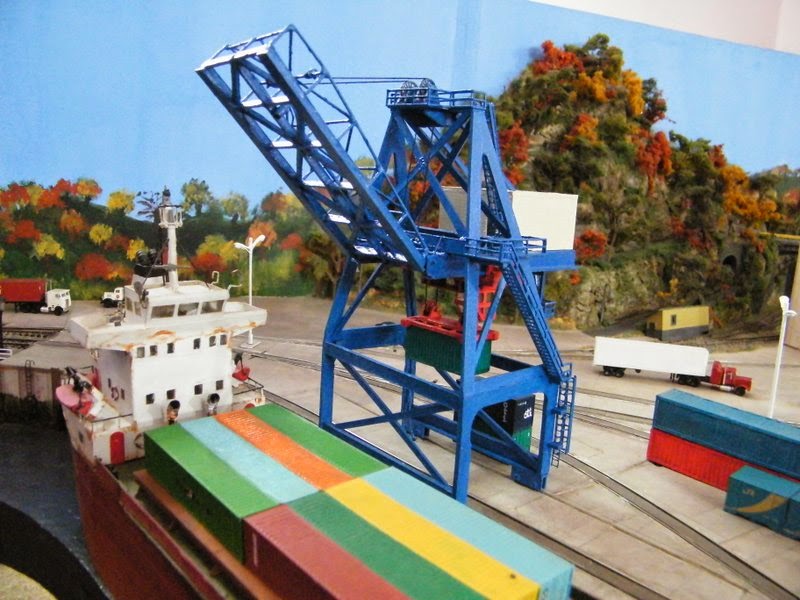 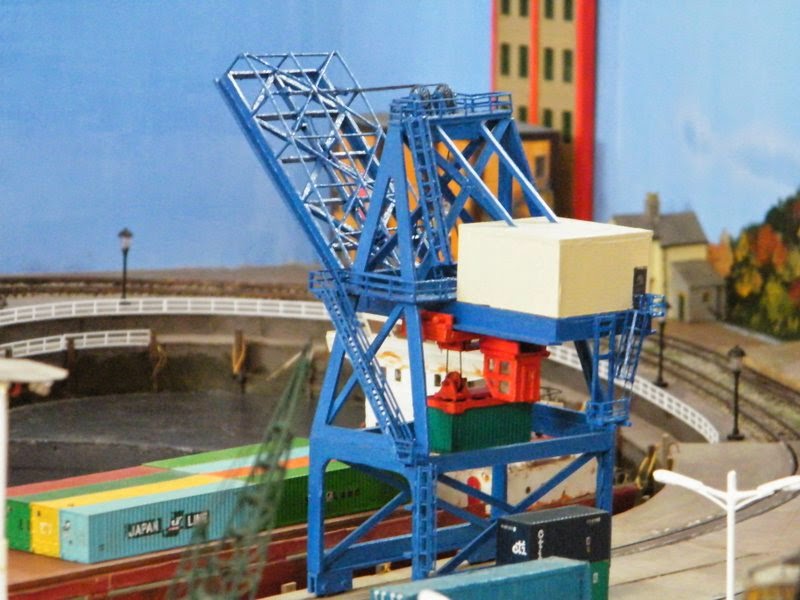 Posted by Kaustav at 7:49 PM No comments: