A Change, A Journey, A New City, A New Home

April 7th, 2012 - that's when I posted the update to move to our new apartment in Calcutta - http://wrightsvilleport.blogspot.in/2012/04/new-and-hopefully-final-home-for.html

As the title reads in that post, I really hoped that that apartment was a permanent home for Wrightsville Port - been lived in 2 places before that, I'm sure the tiny residents and workers of Wrightsville Port were a little apprehensive about another move... I myself was a little weary even to think about another move. It went pretty well for a year, and as it happens in my line of job, things started changing rather a little faster than I expected. And even before I could comprehend the length of the turns, I had a job offer that looked very promising - an opportunity to move up in life as they call it, but it also came with a condition - moving 1500 miles to another city - the city of Nawabs, called Hyderabad. As excited I was about a new opportunity, a new city, I was particularly concerned about Wrightsville Port. Although I have built this layout to suit this type of lifestyle, moving 1500  miles is definitely a tough, and may I call it, the final test of the robustness and agility of my design.

Moving ahead, night of Dec 11th, 2013 I was busy making the final preparation to 'dispatch' Wrightsville Port the next day. As you can see, all buildings, ships and details were movable, so they were removed from the layout and packed in tough plastic containers (from Mouli's kitchen) and secured with packing peanuts. The rolling stocks and locos went back to their respective plastic boxes in which they had originally arrived from the US. By midnight, everything other than the layout was packed and wrapped. 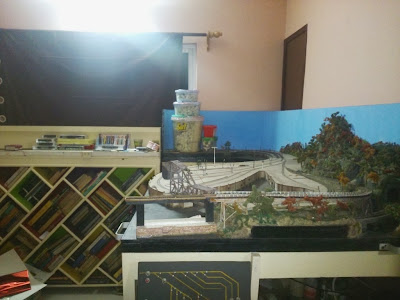 Then I removed the layout and took the opportunity to clean it thoroughly before the packing guys came the next day: 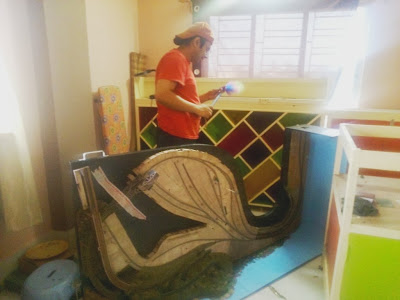 Next day, the professional packers and movers did their tricks. Along with the rest of the house, the layout components were wrapped in protective covers. I wouldn't get into the details of the professional packing methods, here is just a shot of the layout after three layers of cardboard and specialized covers wrapped it nice, warm and cozy before it was put inside a wooden crate: 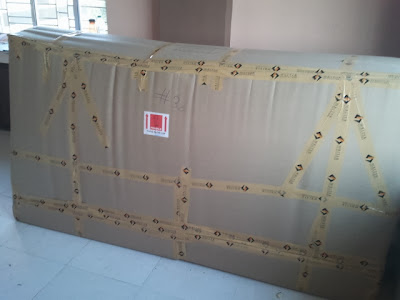 Evening of Dec 13th, the layout started its journey in a 32ft container truck. We started on Dec 18th, and as you can very well imagine, in a train!

It was a special train from Shalimar, a Satellite station of Howrah Railway station - one of the worlds biggest and busiest. The train itself looked awesome in its bright red color. 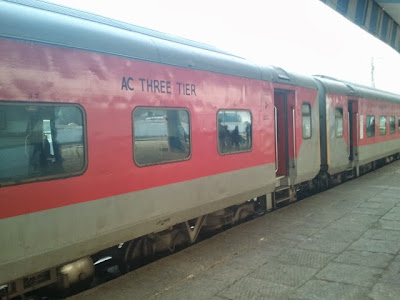 I took the privilege of booking first class for this trip! It was a two person cabin, so it was sort of a overnight stay in a tiny hotel room - we had all the space for ourselves without worrying about where we were putting our luggage and shoes. Here are some shots of the cabin: 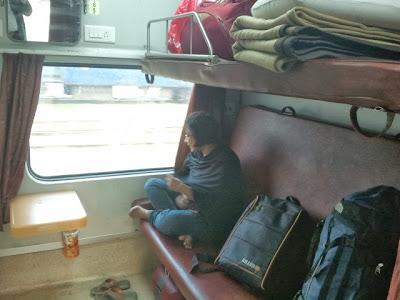 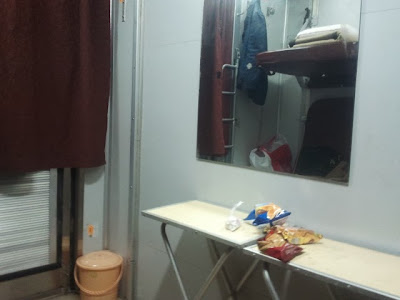 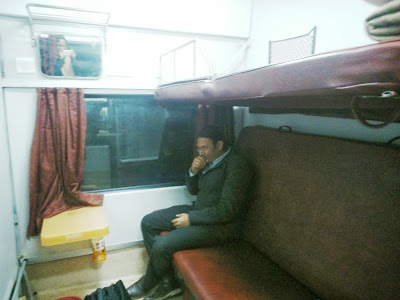 Now, travelling in train after 5 years, I couldn't help taking some pictures! Nothing fancy, as taking pictures through the thick glass wasn't easy due to detraction and dust on the window, and if you want to go to the common area, open the door and take a picture of something that you saw while sitting in the cabin, that thing is nearly a mile behind you by the time you take stance with your camera!

To start with, the Salimar yard: 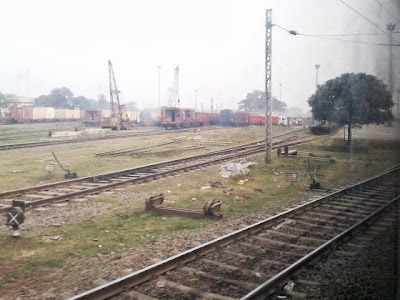 An inbound passenger in Santragachhi yard: 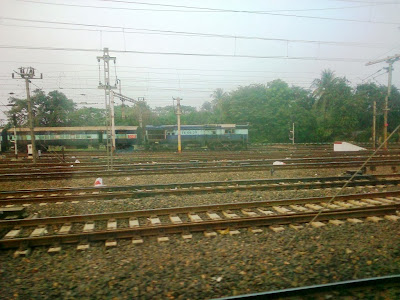 Below three locomotive pictures are taken in various location, and I cannot pinpoint now where: 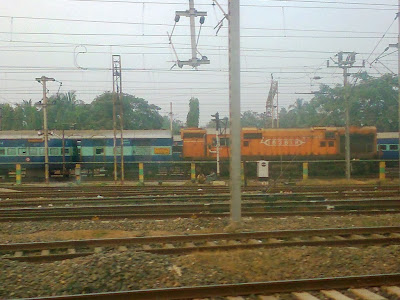 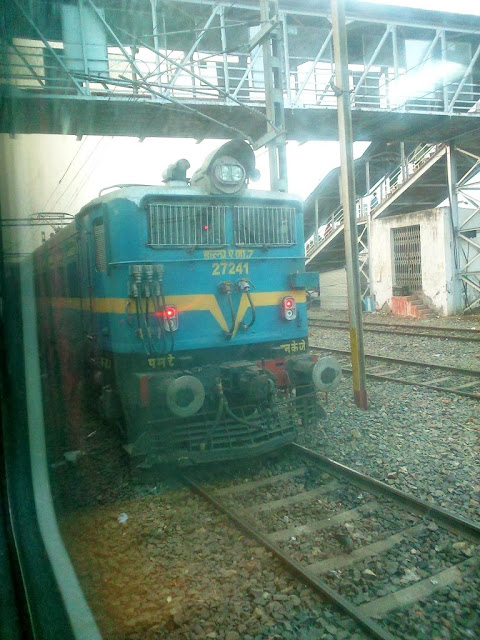 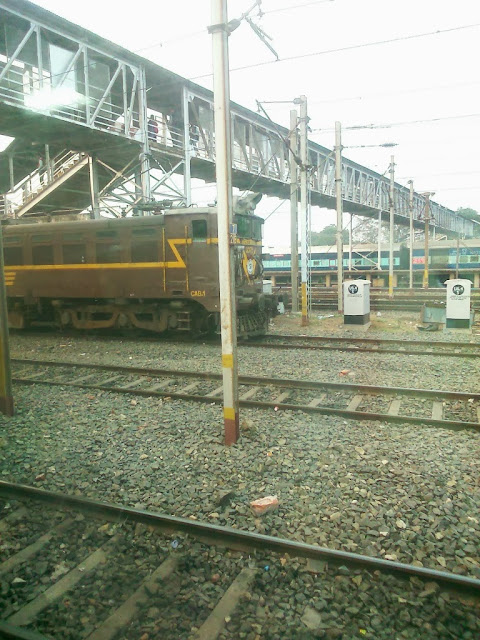 Then there is a MOW somewhere in Odisa: 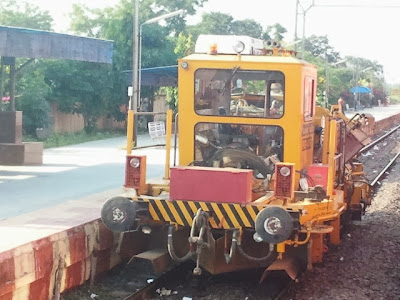 Entering Visakhapatnam, also known as Vizag. These two WDMs did attract my attention: 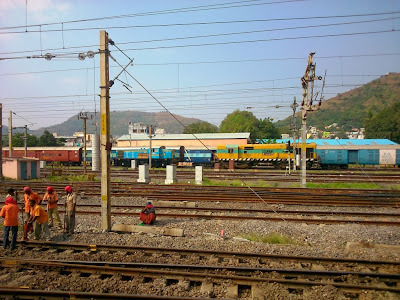 A goods train in Vizag yard: 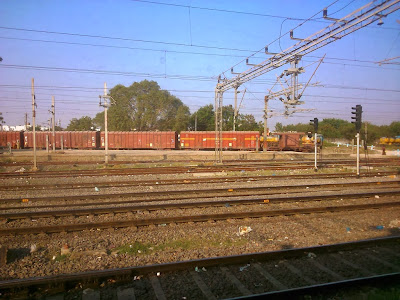 An oil rake in front of a oil storage facility, near Vizag: 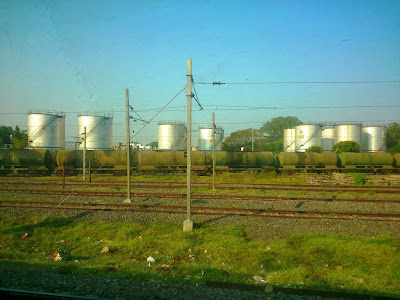 The final shot, and my favorite one in the lot - the bright red train in the background of the setting sun, somewhere between Warangal and Secuderabad. 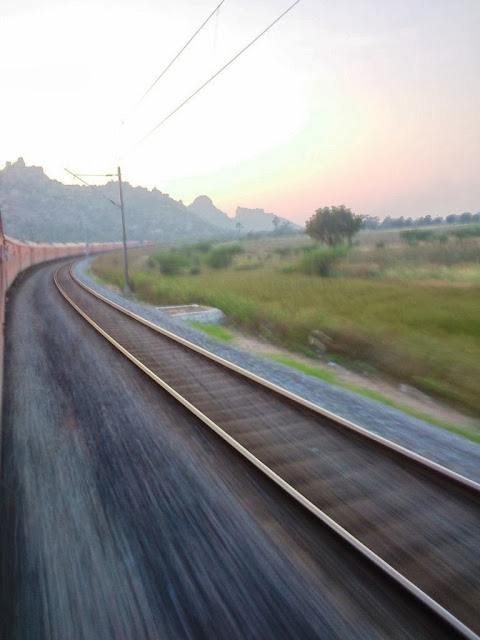 Finally on reaching our temporary guest house after a 27 hour pleasing train journey: 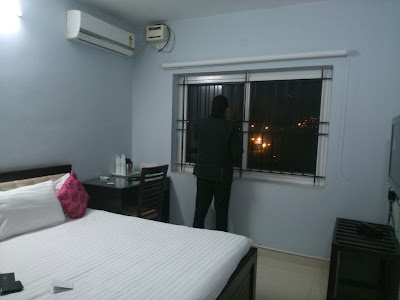 Wrightsville Port, accompanied by its legs and the bookshelf-cum-staging yard, plus the rest of the house arrived on Dec 20th. Upon opening the protective packing layers, there she stood, unscathed and as pretty as ever: 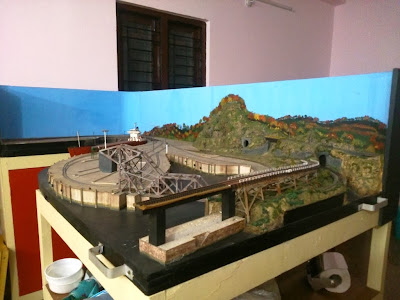 Today, I think I consider my greatest success as a model railroader is not being able to build exciting structures or ships, or making compelling model scenes, rather building a model railroad that has become my true companion - it goes wherever I go, it grows how I grow, it distracts me from disturbing thoughts and helps me stay focused in life... it is now a part of my small, but very dynamic and crazy family - that was the true intention of building Wrightsville Port, and I am glad that I succeeded in that - in gaining a friend in that 6X3 tiny model railroad!
Posted by Kaustav at 9:21 PM