Well, this is that time of the year again, crazy work pressure, hell lot of itty-bitty-tiny problems like mosquitos in an opera house! So, I am in my foul mood again, not being able model, not being able to do any 'prouction' to my level of expectation. Why don't I just get paid for things that I like to do? Life sucks!

Anyway, whatever time I could manage since the last post, I focussed on putting some 'skin' on. Though the major infrastructure work for the layout is complete, it still looks very naked due to unfinished concrete work on the docks. So that's my next focus, no matter how much time it takes.

I changed my approach a little bit since I started putting 'concrete' on the docks nearly 10 months back. Initially I thought of using cardboard for larger area between the tracks and styrene strips between the rails - and then coloring them. Then when I discovered the awesome paper kit from scalescenes - dock TO16 - dock edge. Below are the prints, two shades - block concrete with tire marks - for more busier part of the port and plain concrete for not so much accesseable areas. 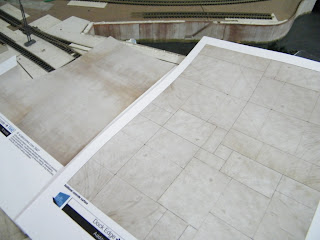 Now first I had created the base using better quality cardboards better than last time, I mean) to bring the level of the rest of the land to the track level. the upper portion of the picture below. 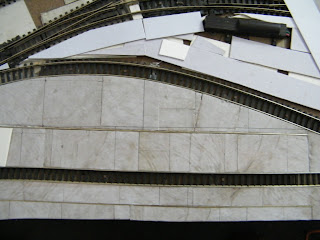 No notice that in the mean time I installed the rails for the container crane and covered the area in concrete. :P 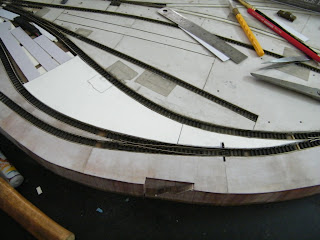 Once the level is set, I used tracing paper and carbon paper to trace out the outline of the area that needs to be covered and then trasfered that to a very nice piece of water color paper of 520 GSM - costs over $4 for a A2 size sheet! These are far better choice over much cheaper cardboard that I used earlier - they tend to bend, glue don't stick properly, becomes mellow with humidity and paint, so though over 6 times costly, my choice was these professional papers for the concrete this time.

Once the shapes fit properly between the tracks after some fine tuning just above the track shoes, and leaves just the top of the tracks to the weather, I pasted them on the appropriate concrete paper (Blocks or normal) based on which part of the layout they are being installed. Let dry for a few minutes and then cut out the shape from the sheet of paper, apply glue on the underside and on top of the track shoes and flush fit them precisely between the tracks. 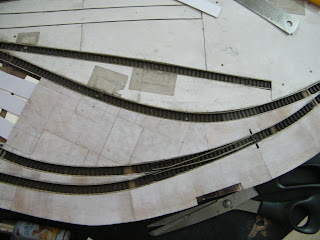 Let the glue dry for a bit for concrete to it's actual effect.

Here is the overall look of the front side of the port now: 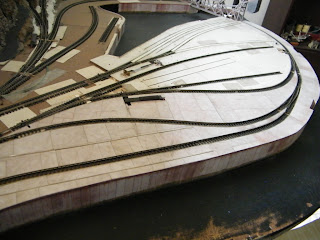 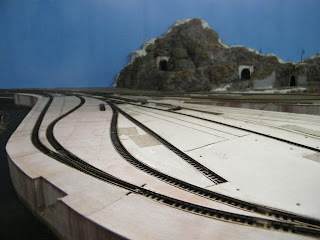 Oh! by the way, we have painted the sky blue in the mean time too! I have also plugged all gaps between my paper hills and the background using my newly discovered modeling material paper clay - the thin white part just between the hill and the background. I am sure it will look good once painted and blended with the scene 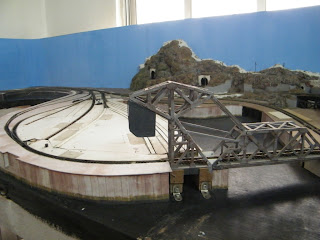