For some reason, I am never comfortable in the 'hands of god' concept in model railroading. In my layout I want things like switch operation and uncoupling to be done remotely from outside the layout. And yes, it has already cut a big hole in my pocket, and I am yet to acquire 9 more switch machines, but I still think it's 'required' for me to be able to do these things without taking my hand anywhere near the tracks.

Let's start with uncoupling. For the spurs it was a easy solution: under the track Magne-Matic delayed uncoupler by Microtrains (The red lines in the picture). The challenge was to find a solution for the mainline uncoupling (blue lines in the picture), because on mainlines, you must be able to uncouple only when you need it. 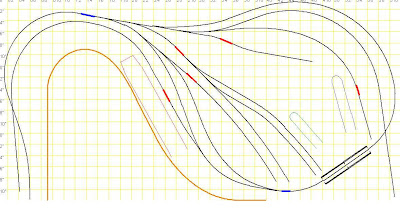 Now there is no off the shelf electromagnetic uncoupler for N scale which is very surprising given how much improvement we have seen in N scale over the last decade. When I was searching for options I happened up on one website that did give me an adventurous solution-bashing a Kadee HOn3 electromagnetic uncoupler kit for N scale! Here is the link to the website: http://www.aglasshalffull.org/article-uncouplers.html

It's a pretty lengthy description, so I will give a brief idea of what I had to do: First I had to narrow down the gap between the uncoupling plate to 6mm-which was quite an event given I don't have a vice. Second I had to alter the track mounting plate quite a bit to be able to squeeze it in between the uncoupler plate (which was not suggested in the website above, but I thought of giving it a try). But as it was predicted, it didn't work very well, so I had to give an additional wire support to hold the uncoupler plates parallel to the track.

Here is how it looks now: 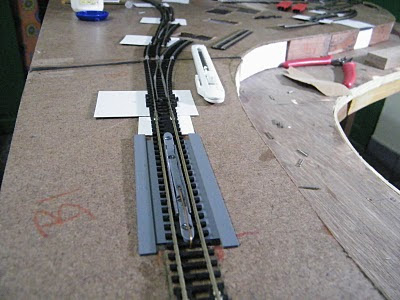 Now there was one thing that was mentioned in the main article that I need to bend the tiny uncoupling rods in the trucks and make them parallel to the uncoupler plate. Doing so, I am unable to uncouple the cars in regular fixed magnet uncouplers. Moreover the electromagnet seem to have magnetizing my uncoupling rods in my cars and they are behaving erratically when they I'm trying to uncouple them with the fixed magnets and they have literally started 'moving on their own!'

So I would say this particular part of the project has quite a bit of hitch and I am not really sure how I am going to fix the problems-but I am sure I am going to get some solution.

Uncoupling on a curved mainline at your will!

Now coming to the other mainline uncoupling section near the bascule bridge I didn't even have the option of using a kit-bashed HOn3 uncoupler. As you can see from the plan it's on a curved mainline, right in front of a switch and there is not way I could use any conventional way of uncoupling here and for a long time I actually accepted the fact that I would have to do uncoupling using hand or a wire. But after I started building the layout, during the very first day when I was placing the tracks and the turnouts to have a feel of how and where the required things should be placed, I got an idea-which for me is brilliant!

I bought a starter pack of S.L. Enterprise's totally hidden uncoupler a few days back for a totally different purpose: modeling moving N scale vehicle without spending as much as a Faller car system. Basically it's a set of 4 highly powerful, tiny buttons of rare earth magnets on a protective iron plate. The whole assembly is pretty small: 25mm X 15mm with four magnets placing on four corners to create a small, but powerful uncoupling zone. I did a small experiment and saw that yes, placing these magnets strategically will uncouple the cars and would even let me do delayed uncoupling! Now what about uncoupling at my wish? My ready made solution was to create a simple hand driven lever system to bring the magnets closer to the tracks when required and taking them away when I don't need to uncouple!

Here are some pics: 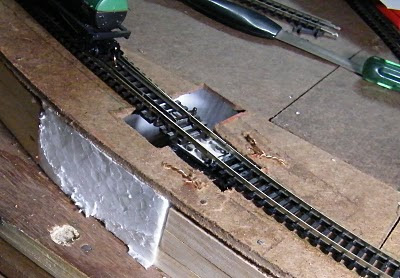 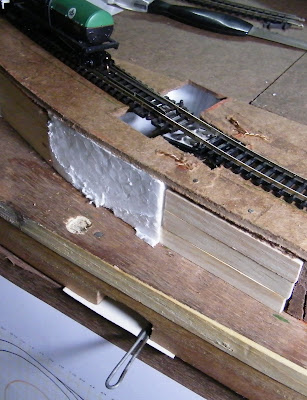 The small iron handle at the bottom of the picture lets me 'activate' uncoupling when needed and bring it back to the default 'inactive' state when I just need to run a train without uncoupling. 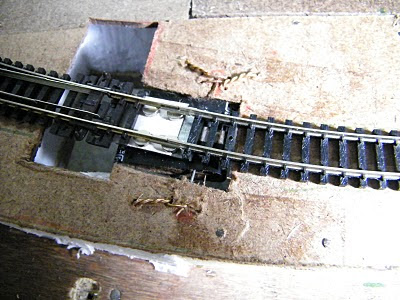 Now look at the placement of the magnets-they are not really symmetrical or parallel to each other. And that is required when you have to uncouple on curved track. Not placing the magents that way will pull both the uncoupling rods in the coupled cars towards one magnet which will not let you uncouple the cars.

Now finally here is how it works:

When the uncouplers are inactive:


When the uncouplers are active: