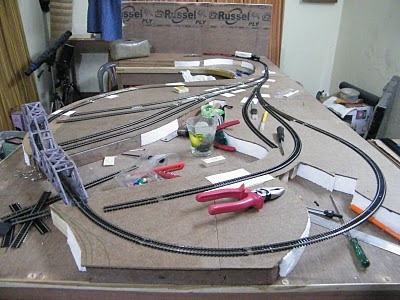 In the picture you will see quite a few thin white cardboard pieces beneath the track in some places. Those are the masking of the switch machine holes and uncouplers. Once the scenery is added, all those will vanish.

As it is evident from the plan, tracks on this layout have a lot of curves (And Oh! I just love them!! :D :D) The yard is on curved tracks, so is the entrance and run-around. So I had to use a lot of flex tracks and curved turnouts from Peco. Talking about Peco switches (I use the live-frog one), I would say it's one of the best decisions I have made to use Peco turnouts on my layout. They are sturdy and hardy, spring loadedfor 100% reliability and gives tremendous performance for slow moving locos-even the smallest of the switchers.

All frogs have been made insulated from the following tracks as required to safeguard short-circuits. Because I have mostly used flex track, use of rail joiners were much less. I used glue and nails to fix the tracks to the bed. I am glad that I decided to use insulating board on foam for this layout. They make track laying a cakewalk!

Notice that I haven't used any additional roadbed for the track, though I had the supply of 48 ft of Woodland Scenic's roadbed. Except the entrance, the rest of the layout will have tracks concealed in concrete (I mean, not literally, modeled to be concealed in concrete) and therefore, an additional height of 4 mm would have given me some trouble filling up the space between the main surface of the landscape and the track level. I originally planned to use additional roadbed in the entrance (The town scene) but then eventually forgot all about it while laying the track! But later I thought, what the heck, I am going to expand the layout anyway... :D 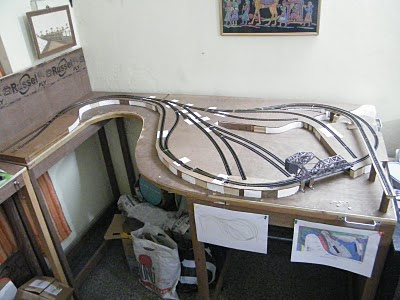 As for modeling the coal trestle and the coal transfer portal, it was tough to find a solution initially. I needed a strong base which is not very thick and wide... something that can easily be modeled to be a steel trestle/bridge later on. After scratching my head for a long time, one idea did click! I used small pieces of balsa wood block (20mm wide X 10 mm thick) used in a game called Jenga by Funskool (Basically a stupid game of putting one block on top of the other, if you ask me). I used these blocks on a narrow piece of insulated board, cut as per the track plan, and joined them together to form the base for this sheet of insulated board. What I wanted was a setup that will let me model the pieces of 'Jenga' blocks as steel girder spans later. Now all I have to do is add some thin cardboard strips to model the spans, and trestle support in each joint-the coal trestle will be ready! The grade on this trestle is around 7% which is decent enough and prototypical. Plus I test run the loco on this trestle and it runs AWESOME in very prototypical, slow speed. Will post some videos later. By the way, I used sectional track to build the trestle. 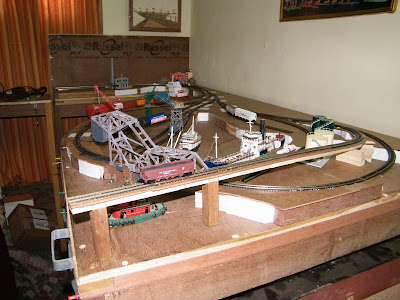 To end with, a small representation of the port with the tracks on... :D :D :D 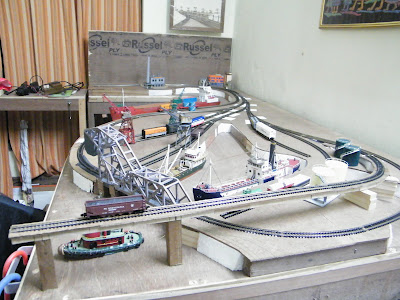 95% of the trackwork is done, only the run around and the engine house spur is left. Ordered for the turnout in Model Train Stuff and waiting for it to arrive...

I will post a separate discussion on uncoupling as I mentioned earlier, and now, all I am waiting for is to wire this up and start running trains... Oh! I will be "happier than a tornado in a trailer park!"
Posted by Kaustav at 2:19 AM