Well, it has been a crazy start to the year for me... average 10-12 hours in office, root canal treatment, buying a new apartment... everything is moving in a rocket speed! Eventually, very less time to spend with my railroad.

But I didn't sit idle... the track and wiring needed some fine tuning, so that's done. another important part is taken care of - staging yard.

Initially I had a plan for a cassette and also made arrangements for that. But when I went to build it, I saw that the drawer is not working properly and it's pretty stiff. I tried lubricating it for some days and tried to do some fine tuning, but it never became smooth. Given I had less time in hand anyway, I couldn't really give a lot of focus on the drawer - moreover I badly needed a functional staging to start operating my layout properly. I thought of dumping the cassette and decided to go for turnouts - I had a few insulated type left from my previous layout and decided to put them to use. Two are Atlas manual and three Model Power (remote, but they were damaged when I had to dismantle my last layout in a hurry while moving to Calcutta). I modified them a little bit so that they can be hand thrown. Then it's a simple fork of 4 arms - 3 arm can hold 10 cars each, one primarily meant for loco/RDC storage. 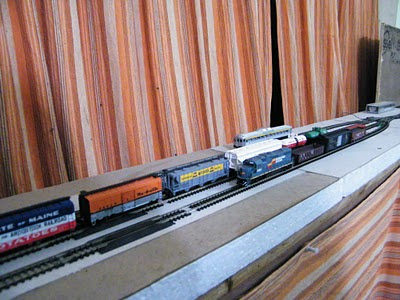 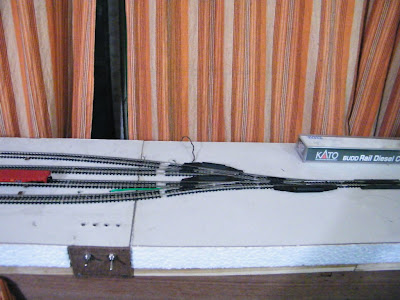 Note that two tracks in the center are always live - ones on the sides can be switched on or off based on requirements. I am planning to put another turnout on the far end and connect the 2 tracks in the middle on the other end to create a siding/runaround. This will reduce the need of lifting a loco and will be particularly helpful for one man operation.
Posted by Kaustav at 5:01 PM